The amiable Karen Guilliland, previously CEO of New Zealand College of Midwives and former ICM Regional Board Member talks about her role in building the midwifery profession in the Asia-Pacific region. 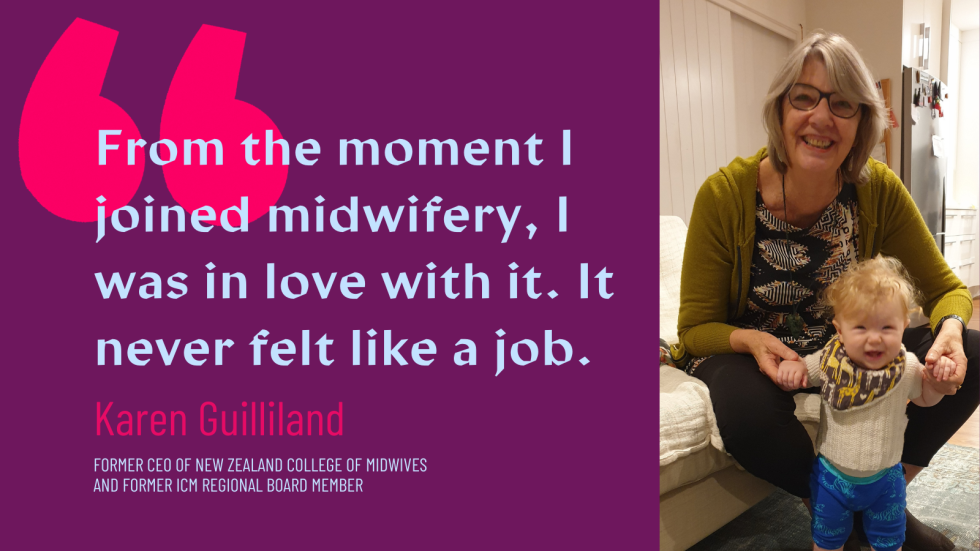 “From the moment I joined midwifery, I was in love with it. It never felt like a job.”

The amiable Karen Guilliland, previously CEO of New Zealand College of Midwives and former ICM Regional Board Member talks about her role in building the midwifery profession in the Asia-Pacific region. Reflecting on her career, she says; “There is need for activism if the needs of women and midwives are going to be met”. In celebration of ICM's 100th anniversary and our efforts to document the history of ICM and midwifery, Faridah Luyiga, ICM’s Advocacy Lead, spoke to Karen about her career.

Tell us about yourself and your journey into midwifery?

My name is Karen Guilliland. I have been a midwife since 1978. I started off as a nurse, but I was never really enthralled with nursing. When I left nursing to have my babies, I lost confidence about going back to nursing. I had a midwife friend who lived in Fiji and she suggested that I join midwifery. I thought, well, I have had three babies. I am pretty sure I know something about it. So, I felt confident that I could do midwifery. From the moment I joined midwifery, I was in love with it. It never felt like a job.

I first practiced midwifery in a big teaching hospital for six years and then I went into teaching midwifery, and women’s health and sexual health. All during this time I had a small caseload of women attending births at home and in birthing centres and taking family planning and parenting classes. In 1989, together with a group of other women and midwives, we established the New Zealand College of Midwives and I became its first National Director. They had the ideas and I had to make them work. [laughs]

From 1971, New Zealand midwives were nurses first and then midwives. But for a lot of the Asia-Pacific region countries like Indonesia, Philippines, Hong Kong, they had always gone straight into midwifery. It was a new discovery for us and strengthened our determination to return to an autonomous profession separate from nursing. So, I think we all influenced each other on how we thought about what midwifery should be like.

What are some of your proudest moments as a midwife?

Achieving autonomy for midwives in 1990 was quite special. Then in 1993, we achieved pay equity with general practitioners (GPs). Those two things were life-changing not only for midwives but also for women. This is because a woman could have her own midwife and could have continuity of care. Enabling midwives to practice autonomously in the community and women to choose their own midwives made a huge difference to their outcomes. Mothers and midwives loved it! Today, 94% of women in New Zealand still choose their own midwife and have her all through their pregnancy and up to 6 weeks postpartum.. However, pay parity with GPs has been seriously eroded as GPs exited providing maternity care. We haven’t done so well in maintaining the pay equity - no one wants to give midwives pay equity because most midwives are women and women’s work is still undervalued. But we are working on it.

I am probably a political midwife first and last. I loved being a midwife, but actually, the call to advocate, the call to speak for others who couldn’t, became the driving force for me. Having been a teenage mother, (I was very young when I had my first baby and I think that teaches you quite a lot about how people treat women who are vulnerable) I was determined that no daughter of mine was going to be treated the way I was when I was 16 years old.

I saw midwifery as a mechanism to empower women so that they can really become good mums and that has really been my driving force. I was very sad when I gave up practicing. However, I felt that education  and political activity was really required because if you don’t have anyone leading the movement, it just sits and doesn’t go anywhere.

Were there many teenage mothers then?

Teenage pregnancies in New Zealand were quite high then. I mean this was 1966-67, a long time ago. Adoption rates were high because there were no abortion services. Teenage pregnancies have reduced quite tremendously over the years, and I like to think that some of it has to do with midwives spreading the knowledge about contraception. We actually empower women now to have more babies when they are older.

When did you first learn about ICM?

The first ICM conference I went to was in Kobe, Japan in 1990. We wanted to go and see what it was all about. It was amazing and it completely changed the way I looked at things. The one thing that really amazed me was the ICM hierarchy. It wasn’t particularly woman-centered. In New Zealand we were busy working with consumer groups and we had women who helped us to change the laws.

New Zealand championed the partnership between midwifery and women. We succeeded in 1993 to get Midwifery defined as a partnership with women at ICM, thanks to the support of women and midwives in the Asia-Pacific region.  America and Europe came out and were like, ‘what is this about?’ They were open to the idea although nobody had articulated it to them before. I loved the way ICM member associations made this possible and saw enormous potential for change by using the ICM platform to change practice and legislation in my own and in many other countries.

Why do you think the partnership between women and midwives is critical?

This partnership resonated with lots of cultures. We were always being lumped with nursing because there were millions of nurses compared to midwives and the nursing philosophy kept coming to the fore. For us to be different, we had to highlight a point of difference from nursing. The difference between nursing and midwifery is in partnership with women and continuity of care. Midwifery can take into account a woman’s maternity journey from pre-pregnancy to labor, to six weeks postpartum.

For midwifery to be defined as a profession, you must have a point of difference from medicine and nursing. This was accompanied by an understanding of women’s bodily autonomy and consent. When I was a nurse, the women just had things done to them. The midwifery role helped to make sure women are involved in the process because they weren’t sick. They were perfect and they were just pregnant. The whole idea of midwifery was to support the bodily autonomy of women. It is all about the fight for women’s equal role and will. Both midwives and women have to fight for that autonomy.

What were some of the midwifery challenges in Asia-Pacific region back then and how have these evolved over the years?

The biggest challenges for Asia-Pacific were the long distances and the diverse cultural differences between countries. We weren’t coherent like the Americas or Europe; our region was really different! Communication was important, and we achieved this through partnerships and networking. We started an Asia-Pacific meeting at the triennial conferences, and we were the first region to do this and it helped to build up trust between member associations. We would then meet every 18 months regionally hosted by a different Asia-Pacific Member Association each time.

Other regions followed suit and we would attend each other’s meetings. We were so different, but we all wanted the same thing. We all had the same agenda - Professionalising midwifery to help women. I think the fact that we all want the same thing is very undervalued. Many governments in the developing world now identify the same thing and recognise that midwives can save and enhance the lives of women and newborns.

What are your hopes for midwives in the Asia-Pacific region?

Surviving the COVID-19 pandemic. It is very depressing for me as an old lady now, to watch what COVID has done to some of these countries’ progress. There are a lot of countries including New Zealand that just ignored the work of midwives, closed maternity hospitals and made them COVID hospitals. Midwifery, mothers and babies seemed to go down the line as less important.

I think as long as the region takes its role of advocacy and education seriously, it has every chance of keeping this midwifery revolution  going. As women get more status, they will choose other careers so we have to make midwifery attractive. The pay is still an issue everywhere.

What changes would you like to see for midwives in the world?

We must be careful not to undermine each other and work together wherever we chose to work. We shouldn’t keep undermining midwifery - like the hospital midwives saying horrible things about community midwives and, the community midwives not liking the hospital midwives. We just have to make sure that we are still talking the same language and that we are still saying; ‘I am in a different place but my philosophy is to empower this woman to be a good mum.’ We should all be standing next to each other and helping each other. We need obstetricians and we need midwives. It’s my wish that the workforce increases to ensure we have a good midwife-to-woman ratio so we can reduce stress and stop bullying behaviours caused by poor working environments.

What key role do associations play in strengthening midwifery?

Member associations are the key to sustainability of midwifery. They are the voice of the midwives in that region or in their country. The international voice [ICM] is also very strong. You can take that international voice to your own government and say, ‘this is what the world’s midwives say’.

ICM has really stepped up the last 20 years to assess member association’s professionalism and regulation. All those things are really important.

Associations are essential for networking, providing education opportunities, advocating for workplace safety and sustaining professionalism. We need to look at member associations as the voice of the midwives and women for the better. They advocate for midwifery environments that make midwifery partnership work and midwives to love what they do. Midwifery advocacy environments also make it easier for midwives to work. Midwives need as much advocacy as women.

Midwifery is political, so we need to accept and use political platforms to increase the visibility and sustainability of the Midwifery profession. We should never stop demanding equality for women and midwives. We need to work with each other as Member Associations, network, and get to know each other’s delegates/presidents, share resources and draft remits together to get ICM members to implement the actions your country needs help with.

As we celebrate 100 years of progress, what are your hopes for MAs and the ICM?

Member associations must participate, be active and vocal. I was a board member for 20 years and there are some associations who didn’t talk to us at all.

ICM has always been the universal network for change, education and advocacy. I think for me ICM is probably our best hope to keep midwifery professional on a universal level. We must protect midwifery in order to protect humankind because with midwifery we have managed to protect newborns and we save lives. Strong women and strong midwives are the foundation of every nation.

Karen Guilliland works with ICM as a member of the Scientific Professional Programme Committee (SPPC), the New Zealand College of Midwives on pay equity issues and as a Board member of  the Federation of Primary Health Aotearoa; a collection of all primary health workforces including midwives advocating for community care.