History of Midwifery: A look back at midwifery developments in Anglophone Africa with Dr. Jemima A. Dennis-Antwi

As we celebrate the International Confederation of Midwives’ 100th anniversary, we’re looking back on centuries past. In this interview with Dr. Jemima A. Dennis-Antwi, we explore midwifery developments in Anglophone Africa. 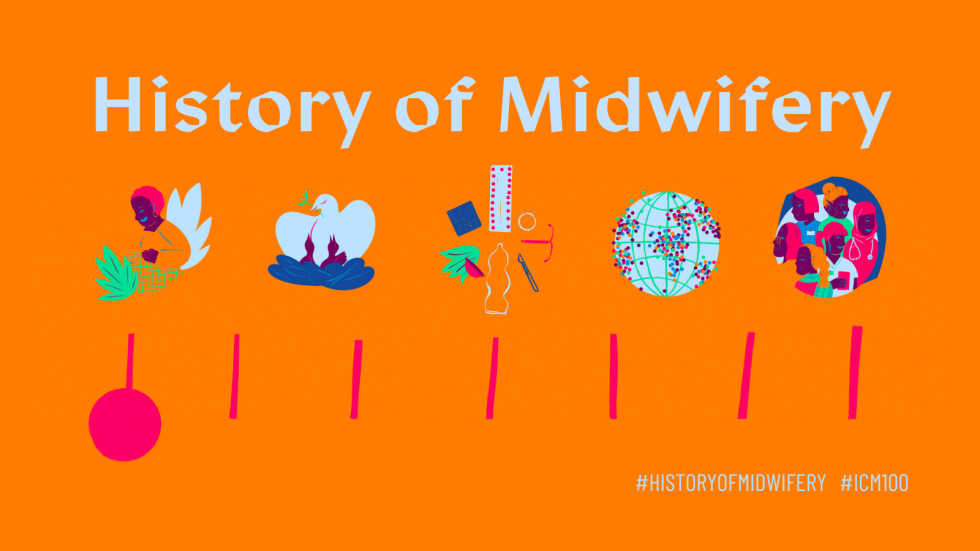 History of Midwifery: A look back at midwifery developments in Anglophone Africa with Dr. Jemima A. Dennis-Antwi

Bio: Dr. Jemima Araba Dennis-Antwi is a multi-skilled, Ghanaian Midwife and Health Promotion/Communication Expert with over 33 years of cumulative experience locally and globally. She has led several collaborative health programmes in public service, development work and independent consultancies in maternal and newborn health/midwifery, nursing, health systems strengthening, programmes administration and research. She has also held various high-level consultancy roles in this regard, including 11 years of work with ICM (5 years as staff and 6 years (2 terms) as member of Board of Directors of ICM representing Anglophone Africa).

Notably, Dr. Dennis-Antwi served on the transcontinental (Africa, Asia, Latin America and the Caribbean) Midwifery programme which was a collaboration of the International Confederation of Midwives (ICM) with UNFPA. She served as the Regional Midwives Advisor for Anglophone Africa (2009-2013) and was responsible for providing technical oversight to 10 African countries (Ethiopia, Ghana, Liberia, Malawi, Nigeria, Sierra Leone, Sudan, South Sudan, Uganda, Zambia) and Guyana in midwifery strengthening.

Dr. Jemima Dennis Antwi first qualified to practise as a registered midwife in 1988 and worked with the Ghana Health Sector as well as local and global development partners over the years. But it wasn’t until she was appointed as the International Confederation of Midwives (ICM)’s first Anglophone Africa Regional Technical Advisor in 2009 that she believes her notable career in global midwifery system strengthening truly gained focus and intensity.

In 5 years, while serving in this role for ICM and UNFPA’s Investing in Midwifery program, Dr. Dennis Antwi contributed significantly to advocating for midwifery as an independent profession separate from Nursing, but of symbiotic complimentary status; improving midwifery systems of education, regulation, association and policy and practice in 10 African countries, including Ethiopia, Ghana, Liberia, Malawi, Nigeria, Sierra Leone, Sudan, South Sudan, Uganda and Zambia. Through this work, she also shared regional experiences with other countries in Asia and Latin America and in global collaborative endeavours. These contributions even continued whilst serving in her Board role with ICM for the 6 years of service.

Dr. Dennis Antwi says the profession of midwifery in the early 2000s was “near extinction as few people showed interest to practice the profession, and most existing, practicing midwives were nearing retirement.” The advent of the Millenium Development Goals (MDGs) with the focal attention on the very high maternal mortality rates in many African countries, Asia and Latin America served as a right impetus to the implementation of the ICM/UNFPA Investing in Midwifery Program that began in 2009.

Moreover, the ICM’s global standards for midwifery education and regulation were largely unknown then, and therefore, many post-nursing midwifery training programs did not meet the global standard criteria of the 18-month training period.

“There were also challenges around the qualifications of faculties teaching midwifery in training institutions and their low levels of qualifications to assume such positions,” said Dr. Jemimi Dennis Antwi. “The midwifery faculty in many countries was very weak, with no formal local institutions for producing tutors. Additionally, many countries had ill-equipped clinical skills laboratories for students’ learning, thereby compromising competency-building both at school and at the clinical sites.”

Through the ICM/UNFPA Investing in Midwifery program, Dr. Dennis-Antwi and colleagues (Dr. Abigail Kyei, Rachel Ibinga-Koula, Geeta Lal and Pashtoon Azfar) worked with Country Midwife Advisors in local UNFPA offices and the stakeholders at the Ministries of Health and their collaborators in the chosen countries to initiate a series of activities for midwifery strengthening over the years. These activities were informed by country needs assessments, country-specific strategic plans and local and global policies including the ICM global standards. Every country was at a different level of development at the start of the program, and each had distinct political and social contexts to consider as part of the implementation process to ensure relevance.

“It was necessary to assess each program’s strengths, weaknesses, opportunities and threats (SWOT),” said Dr. Dennis-Antwi. “So we assessed education, regulation and association using the ICM global tools and standards that were in place at the time. Through those assessments, we were able to develop the strategic plans, and then corresponding annual plans.”

Through these plans the team ultimately observed gradual, remarkable improvements in midwifery education, regulation and association in the region. Countries revised their educational curriculum informed by the ICM education regulatory standards; Faculty members in midwifery education pursued higher education to better serve student midwives; Countries accepted and implemented the ICM Essential Competencies for Midwifery Practice; Education facilities began to equip their clinical labs with well-resourced libraries for learning midwifery skills with the support of varied development partners, especially UNFPA; The ICM regulation standard was instrumental in supporting countries to review and update their obsolete regulatory legal frameworks to reflect the provisions of the ICM global standards. By 2013, midwifery systems in over 40 countries in Africa, Asia and Latin America had been impacted by the ICM/UNFPA Investing in Midwifery Program with positive outcomes.

One of Dr. Dennis Antwi’s proudest accomplishments, however, was seeing progress around the acknowledgement of the importance of direct-entry midwifery programs.

“We didn't have direct entry midwifery (at the start of the Investing in Midwifery program) in many countries. A lot of the countries had only nurse-midwives. Continual and sustained high-level advocacy efforts led to gradual recognition of midwifery as an independent profession from nursing, with some countries such as Ethiopia and Ghana embracing the direct -entry midwifery programs. Other countries set in place modalities for nurse-midwives who had been practising for many years as midwives to be recognised as MIDWIVES. The program developed alliances with global and regional bodies such as West Africa College of Nursing (WACN) and the East, Central and Southern Africa College of Nursing (ECSACON) to further introduce the standards and to create a wider and leadership understanding of the need to strengthen midwifery system in their respective countries and to support the integration of ICM policies and guidelines. That was an important agenda we were able to create.”

To this day, Dr. Dennis-Antwi continues to work with countries in Africa, and she feels humbled and proud to experience the exponential, cumulative impact and continued success of those strategic actions initiated in the past. However, she further acknowledges that there is still work to be done as an evolving process for midwifery to attain the highest standards in Africa. Particularly, she says, she believes the future holds more promises for midwifery leadership as many countries have now introduced higher education in midwifery up to even PhDs/post-graduate specialisations. Direct-entry midwifery career pathways are being introduced in the health sector in countries to create an independent trajectory of progression. This is good news indeed.

“Leadership in midwifery is very critical if we want to make midwifery a profession to reckon with at the level of decision making. It is critical that somebody speaks for midwives and midwifery because maternal and newborn health continues to be a very important driving force for the health of a nation. There is currently a lot of work being done—led by the World Health Organization (WHO) together with ICM, UNFPA and UNICEF—that is strengthening midwifery leadership. But leadership encompasses education regulation, association and advocacy. Only when all these aspects are improved can midwife leaders begin to lift the image of midwifery and encourage the young midwives to see midwifery as a viable profession for the future.”

Today, Dr. Dennis Antwi continues her work in global midwifery strengthening with key ICM partners including WHO and White Ribbon Alliance (WRA), and she hopes the next 100 years of ICM would include innovations to further mobilise the work of these partner organisations amongst ICM member associations. Her work with WRA as the organisation’s Ghana Affiliate enabled the global Midwives’ Voices, Midwives’ Demands survey to obtain over 10,000 survey responses from Ghanaian midwives.

“How do we make these voices heard beyond just a survey and move them toward a global agenda?” said Dr. Dennis Antwi. “How can we translate this effort to ICM’s global members? With WHO, I’m currently contributing to the implementation of the WHO framework for midwifery education in 5 countries. With that, my question is, how does ICM rally its members and its partners to critically push this agenda as a cohesive, impactful force?”

As ICM joins Dr. Dennis-Antwi and our member associations in looking forward to the many years of progress to come, we are grateful for powerful advocates like Dr. Jemima Dennis-Antwi and sound partners like UNFPA, WHO and WRA, with whose support we may continue to strengthen midwifery globally and with whom we can reflect upon and celebrate our collective progress thus far.